Gregory Hasek started his career in the counseling field working with adolescents in various residential treatment facilities, wilderness camps etc. This work took place for several years in the late 80's and early 90's. He received his A.S. degree in Outdoor Recreation in 1983 and later his B.S. degree in Outdoor Recreation in 1991 from Montreat College in Montreat, North Carolina. He then attended George Fox University in Portland, Oregon from 1995-1998 and received his Masters degree in Marriage and Family Therapy. He has been a Licensed Professional Counselor in Oregon since 2004. He has also been the executive director of a Christian non-profit counseling agency called Misty Mountain Family Counseling Center since 2004 in Portland, Oregon, until his recent move to Southwest Florida in 2015. He has been a Licensed Mental Health Counselor in the state of Florida since 2015. He is also a Florida Qualified Supervisor for both Registered Mental Health Counseling and Marriage and Family Interns.

He has a passion for working with couples where one or both have had trauma in their past. His desire is to help couples move from being in a destructive cycle of interaction to one of healing at a deeper attachment level, where emotional needs are both expressed and met. He believes that couples can either "rewound each other from childhood" or they can help "heal each other from childhood". He also has a passion for using not only music as a tool in counseling but other alternative treatments such expressive and experiential therapies to help heal the body, mind, emotions and spirit. Since 2004, he has specialized in working with individuals, couples and families who have been affected by sex addiction, pornography and post abortion issues for men and women.

In addition to providing counseling, Mr. Hasek enjoys teaching and presenting at workshops. He has previously taught in George Fox University's Graduate School of Counseling for six years from 2005 to 2011. He is a frequent and highly requested national speaker. He presents at numerous conferences and workshops across the country on issues related to sex addiction and post abortion issues in men. In 2005, he organized the first ever men’s summit in the United States to specifically address how abortion affects men. Since then he has been involved with others in developing The Men and Abortion Network, which is a national organization with a mission to create both awareness and healing for men who have lost a child due to abortion. Mr. Hasek has spoken at numerous conferences over the years, including National Right to Life conventions. He was one of the featured speakers at “Reclaiming Fatherhood,” an international conference on men and abortion, which took place in 2007 and 2008. He has received international attention for his work on men and abortion issues and has presented in Australia in 2012, and at the World Congress on the Family in Barbados in 2016. He is a founding member of the Crisis Pregnancy and Abortion Recovery Division of the American Association of Christian Counselors. He has also recently developed an organization called the American Association of Therapists Treating Abortion Related Trauma, which has a goal of developing evidenced based treatment programs for abortion related trauma.

​Mr. Hasek is married with two step children. In his free time he enjoys the sunshine of south Florida and outdoor activities such as kayaking and going to the beach. He also enjoys being involved with his church. ​​
Stacie Kreiger, MA
Licensed Mental Health Counselor in Florida

Stacie Kreiger has a Masters of Arts in Counseling from Grace College in Winona Lake, Indiana. She graduated in 2009. She started in her own private practice in 2009 in Fort Wayne Indiana before moving to Southwest Florida.

She found her calling later in life. She knew that God was grooming her to help others for many years. She often says that she didn't find counseling, it found her. Her journey in life as a wife, mother, and businesswoman has given her a good understanding of the stresses and demands of everyday life. She understands that the struggles we all face are personal and often profound. Her goal is to create an atmosphere for her clients that offers them Comfort, Care, Christianity and Compassion. She strives to provide services to her clients that are empowering and uplifting.

She is able to create a strong connection with most people and has the ability to help treat many disorders. However, her greatest specialty is Christian Counseling. She uses her gifts to specifically treat issues such as anxiety disorders (including ocd), depression, marital therapy, relational issues, family interventions, behavioral issues with children/adolescents and alcohol/drug addiction, to name a few.
​
She believes when clients discover the talents that God has given them and use them to glorify Him, they will begin to feel whole and complete. This journey will be a significant part of a client's healing. She feels blessed to be able to be doing this work and is excited to also help her clients find their own calling in life. 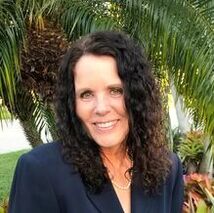 ​Julie Daubenspeck is a devoted follower of Jesus Christ. A pastor’s daughter, she grew up in the church and experienced true faith and also hypocrisy.  Like so many of us, Julie was broken at an early age. In her pain and desperation, she ran to Jesus. He carried her through her darkest days and later through a deep healing and restoration period. Today, Julie is a wife, mother, grandmother, teacher, speaker, therapist, and a woman who has experienced the immense grace of God.

Julie began her professional career as an elementary school teacher. Years later, after her youngest son graduated from high school, Julie felt led to go back to college and get a Masters degree in Marriage and Family Therapy. As a clinician, Julie spent several years working with victims and survivors of intimate partner violence. Julie remains especially passionate about helping victims and survivors of sexual abuse and domestic violence. With a systems perspective, she believes it is important to help the families, as well.

Julie spent years traveling the world with her husband while he was active duty in the United States Air Force. A former military spouse, Julie is a strong supporter of our military and is committed to helping military families, veterans, and retirees. While in Hawaii, Julie worked as a Military Family Life Counselor in the schools assisting military children and their families with the unique day to day challenges of military life.

Julie is a Licensed Marriage and Family Therapist in Florida, Colorado and Hawaii. Julie is a tested educator and a model Experiential Family Therapist with a proven impact on communities, organizations, families, and individuals.

Julie has been married to her wonderful husband, Vince, for 34 years. They have three adult children, their wonderful spouses, and seven energetic grandchildren. Both Julie and Vince are authors and have published several books. You can check out their books at humptydumptybook.com. Together, they are passionate about helping others find hope and healing with our King.
Bernadette Russo, MA
Registered Mental Health Counselor Intern

Bernadette Russo is a counselor with passion and dedication to her clients. She has a Bachelor’s Degree in Psychology from Ave Maria University and a Master’s Degree in Clinical Mental Health Counseling from Franciscan University of Steubenville, which is a CACREP accredited Christian University.

Her mission in treatment is to create a genuine and safe atmosphere for her clients to tackle any of the challenges they are facing in life. The biggest predictor for clients in successfully reaching their therapeutic goals is the client-therapist relationship, so trust and communication are her priorities. At times she may challenge her clients, but at the same time, she gives her clients tools, provides support, offers warmth and a sense of  humor. She will incorporate faith into whatever degree clients feel comfortable. The treatment plan will be tailored to client's unique abilities and needs.

She started her career providing therapy for individuals in crisis and detox. She continued with group and individual therapy to adults struggling with drug and alcohol addiction in West Virginia, which has the highest age-adjusted rate of drug overdose deaths involving opioids of any state. She then joined a group practice in Pittsburgh, where she provided effective individual therapy to teens and adults (from ages 13- 84) with a broad scope of challenges. She has experience offering in-home therapy to children and families struggling with oppositional behavior and high levels of conflict.

Cognitive Behavioral Therapy, mindfulness-based strategies, and solution focused therapies are some of the approaches that she has have found most effective. PTSD/trauma, depression, anxiety, phobias, obsessive compulsive disorder, personality disorders, stress management, substance use disorders, conflict resolution and anger management are a just some of the areas in which she has provided psychotherapeutic services. ​
Powered by